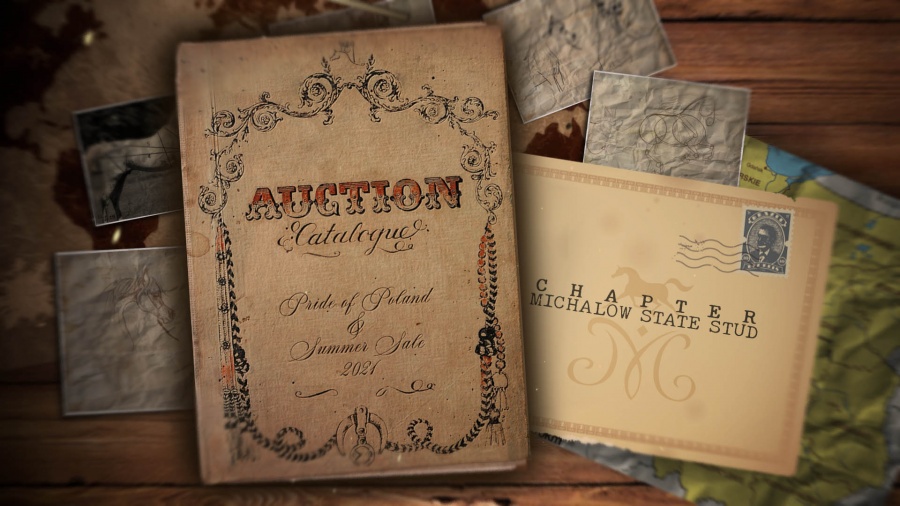 Seize the opportunity to acquire the absolute best of the best from Michałów Stud: EL MADERA is an already accomplished youngster from the line of the famed EMIGRACJA, sired by the most talked about stallion in Poland – Michałów’s very own MORION.

EMANDORISSA is an exceptional offer from the barns of Michałów, as a seasoned show mare at the prime of her life, with an abundance of titles to her name. She is the Jr. Silver Champion Mare from the 2015 Al Khalediah European Arabian Horse Festival, a 2019 Polish National Senior Top 5 Mare and an absolute stunner in 2020 when she became Polish National Senior Silver Champion Mare and European Senior Silver Champion Mare. Her sire is ABHA QATAR, a well-known show champion from the Middle East, winner of the Qatar Intl. Show and the Prince Sultan Arabian Horse Festival, among others. Whereas her dam is none other than Michałów’s esteemed broodmatron EMANDA, making EMANDORISSA a maternal sister to the one and only EMANDORIA. EMANDORIA is a living legend and an absolute Queen of Michałów Stud. Her beauty exceeds boundaries, as she has been crowned champion mare in Europe, America and the Middle East, including World Champion, European Champion, US National Champion, Arabian Breeders World Cup Champion, Polish National Champion, All Nations Cup Champion, as well as multiple champion from internationals shows in Abu Dhabi, Dubai and Sharjah. EMANDORIA has also received two "lifetime achievement awards" of the highest calibre: the WAHO Trophy for an outstanding Arabian individual and World Platinum Champion Mare. This season she has been bred to Michałów’s top sire of today – World Junior Gold Champion Stallion, Qatar International Jr. Champion Stallion and a double Polish National Jr. & Senior Gold Champion Stallion MORION, whose offspring unanimously won all of the championships at the 2021 Jr. Spring Show in Białka, namely: EL MAESTRO, EL MEDIDA, EL MARIELLA and FERRUM, who in 2020 was additionally crowned as 2020 Białka Jr. Spring Show Yearling Champion, Polish National Yearling Champion & Best in Show and European Yearling Champion Stallion.

Ebira embodies the best characteristics of her strong Michałów-based heritage of family foundress ESTOKADA through both sire and dam. Her sire EMPIRE is Polish National Champion & European Bronze Champion Stallion, descends from the branch established by the iconic EMIGRACJA and is already the sire of several show champions, including EL LARINERA, KRESZ, WOJ, ATAKAMA, BACHMAT PA & EMAR AVI.

Ellena is a distinguished broodmare boasting a pedigree centered around the best of Michałów’s specimen, the undefeated EKSTERN and the iconic broodmatron EMIGRACJA from Michałów’s E champion dam line. EMIGRACJA proudly bore the title of Polish Senior Reserve Champion Mare, but it was the WAHO Trophy - an award given out to outstanding individuals of the Arabian breed - that really reflected her merit. EMIGRACJA descended from ESTOKADA, the founder of Michałów's E dynasty of worldwide champion, that many equines today lay a happy claim to. But as a matter of fact, it was none other than EMIGRACJA that brought the most fame and recognition to her damline. Her produce included significant show champions and prominent broodmatrons. Currently the 5th generation of EMIGRACJA's descendants are taking center stage, the most recent including Sharjah Intl. Arabian Horse Festival Senior Silver Champion EL SAGHIRA and chief sire, Polish National Champion EMPIRE. EMIGRACJA is instantly identified by all Arabian aficionados as the dam of champions and champion producers EMIGRANTKA, EMANACJA, ERLANDA, ELLADA, ETENTA, EMOCJA and her last daughter EL KAHIRA – Ellena’s dam.
EKSTERN needs no introduction. Affectionately dubbed "the King of the Ring", EKSTERN remains an undefeated show champion with 9 prestigious titles to its name, among them Polish National Jr. & Senior Champion Stallion, 2000 European Triple Crown winner as All Nations Cup, European & World Senior Champion Stallion, Mercedes Diamond Cup Champion and a WAHO Trophy honoree for an outstanding individual of Arabian breeding. But more importantly EKSTERN is a producer of champions and even more - of broodmares which produce yet another generation of champions. Looking only at recent years we come across his daughters that foaled the biggest names in the industry: PUSTYNIA KAHILA (out of PUSTYNNA MALWA by Ekstern), MORION (out of MESALINA by Ekstern), EQUATOR (out of EKLIPTYKA by Ekstern) and WIEZA MOCY (out of WIEZA MARZEN by Ekstern).

Dyplomacja comes from an athletic family of track accomplished females. Her dam (DZAKARTA), granddam (DOMBRA) and great-granddam (DABROWICA) have all secured wins on the racecourse, as has Dyplomacja herself. But true to the tradition of the Polish breeding program, athleticism is paired with beauty. DZAKARTA’s sister DOLORES is a Jr. Spring Show and Polish Nationals Class Top 5 finalist, while their dam DOMBRA is a sister to Jr. Spring Show & Polish Nationals Class Top 3 DROGA MLECZNA, a phenomenal mover awarded with top marks for this trait at every showing and DEBOWA GÓRA, dam to Polish National Jr. Top 5 DEBOWA ŁAKA. DOMBRA’s dam DABROWICA is also surrounded by accomplished relatives - she is a sister to Tel Mond Junior Reserve Champion & Israeli National Senior Champion Mare DUMKA and is out of a sister to DEBOWIEC - Brazilian National Senior Champion and leading sire of show and breeding horses in that part of the world, the most famous of them being JIULIUSZ DE WIEC.
Dyplomacja is currently in foal to MORION – the most coveted Polish sire of today. His offspring unanimously won all the championships at the 2021 Jr. Spring Show in Białka. One of them, FERRUM, has also made a name for himself in 2020 by winning the Białka Jr Spring Show Yearling Championship, the Polish National Yearling Championship & Best in Show and European Yearling Championship.